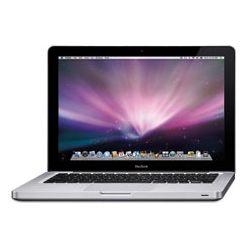 If an Apple iMac married a MacBook Air, what would their offspring look like? A lot like Apple's new upscale MacBook.

I use the word upscale because even though prices for the newest version of Apple's consumer laptop are largely unchanged, the look, feel and performance seem almost luxurious in comparison with the previous generation.

That's not to slam earlier MacBooks, which have been incredibly popular and a major boost to Apple's bottom line financially. It's simply to indicate how much nicer the one I'm using right now is.

If you're looking for a MacBook -- in fact, if you're considering a small to midsize laptop of any kind or operating system -- you really owe it to yourself to look these over before deciding. The first entry in the new lineup isn't very exciting: US$999 gets you an entry-level MacBook that's basically a warmed-over previous-generation model with slightly better hardware -- a white plastic body enclosing a 2.1-GHz Core 2 Duo processor and a now-standard SuperDrive that reads and burns CDs and DVDs.

The big news is in the new two models in the line: a US$1,299 model with a 2-GHz Core 2 Duo chip, and a US$1,599 version that sports a 2.4-GHz processor. (We recorded our unboxing of the new MacBook -- the video is below. Unboxing pictures and videos have become something of a tradition among eager Apple fans when new hardware is released.)

The redesigned MacBooks look nothing like their lesser sibling. That's because both are made using a new manufacturing process that Apple officials talked up during the unveiling on October 14. At the same time, Apple released two new 15-in. MacBook Pro models.

Most people probably care less about how a laptop is made and more about what's inside. But in this case -- literally, in the MacBook's case -- lies the difference. Apple has devised a way to carve the main chassis for its laptops out of a solid block of aluminum. The end result is a "unibody" laptop with no seams around the edges, no flexibility in the case and a distinctly high-end feel. The use of aluminum is a step up from the MacBook Pro and Air lines, since until now, MacBooks were always encased in plastic.

I said it recently about the MacBook Pro, and I'll reiterate it here: This is the most solid-feeling laptop I've ever used, and the keyboard -- always a dicey part of the laptop equation -- feels just as rugged. Although the MacBook uses the same Chiclet-shaped keys as before, they exhibit none of the sponginess I noticed in earlier iterations. Best of all, in the US$1,599 model, they even light up in the dark, a decidedly luxurious touch that is yet another perk ported from the MacBook Pro and Air.

Like the Air, the keyboard on both aluminum MacBooks is black, nicely matching the new black bezel that surrounds the 13.3-in. LED screen. The bezel contrasts smartly with the 1280-by-800-pixel screen, which is amazingly bright and sharp. Even sitting outside in full sunlight, with the sun behind me shining directly on the screen, I could easily see what I was writing. The screen is easily as bright as the MacBook Air I bought last March.

There's little doubt the US$999 MacBook is the poor stepchild of the new family. Just take a look at Apple's MacBook Web page and see if you can find it. Although this MacBook comes with a marginally faster processor than the US$1,299 model -- 2.1 GHz compared with 2 GHz -- other changes make the midline MacBook slightly faster. The US$1,299 version has twice the RAM (2GB) than its all-white cousin, a faster 1066-MHz front-side bus and the new Nvidia GeForce 9400M integrated video processor, which can use up to 256MB of system RAM and drive an external monitor at 2560 by 1600 pixels. It also has a bigger hard drive: 160GB instead of 120GB.

But Apple went all out on the US$1,599 model. Even though it's $100 more than the previous model in this slot, it's well worth the higher price. The most expensive MacBook -- which is the one Apple sent to us for review -- now has a 2.4-GHz Core 2 Duo chip, a 250GB hard drive and the lighted keyboard. Both unibody models also feature a new MiniDisplay port for connecting to external displays and, more importantly, Apple's slick new glass-covered multi-touch track pad.

Gone is the clicker button. It's now incorporated into the track pad, which is larger than the previous version and offers more room for Apple's multifinger screen-navigation swipes. Pressing down on the track pad near the front of the laptop yields a definitive click, and the glass surface offers just the right amount of resistance. It's not mirror-smooth, but it offers less friction than the old metal track pad. The only hitch is that if you use your thumb to click and your thumb touches the track pad at the wrong time, you'll find yourself selecting items, moving windows or changing font sizes inadvertently. It will likely take most users a few days to get used to the new technology, which builds on the multi-touch gestures that debuted in the iPhone last year.

As before, all of the ports are on the left side of the laptop, just as they are now on the MacBook Pro -- though the MacBooks don't have the FireWire 800 port built in to the Pro models. The optical drive remains on the right side of the machine.

The aluminum MacBooks weigh 4.5 lb., about a half pound less than the earlier model, and they're a little slimmer, just 0.95 in. thick with the lid closed. That's not much thicker than the Air, which has a more tapered look but is 0.76 inches wide at its thickest.

A rival for the Air?

The MacBook and the MacBook Air fill slots in different parts of the marketplace. The MacBook is thoroughly mainstream, while the Air is a niche product for those who value style and ultimate portability at the expense of some speed and functionality. Both are solid offerings in their respective sandboxes, but I do wonder whether the new MacBook might cut into Air sales for the next few months until Apple offers a more updated Air.

Here's why: The two MacBook Air models sell for US$1,799 and US$2,499. The top-end version has a slower processor (1.8 GHz) than any of the MacBooks, including even the US$999 white one. It offers less storage space, its RAM can't be upgraded beyond 2GB, and it doesn't have the optical drive built in, meaning you'll pay another $99 for an external drive. Both incorporate the same integrated Nvidia processor -- and the US$1,599 MacBook has that lighted keyboard.

The Air is, without doubt, the better-looking laptop, almost unbelievably thin, and it only weighs 3 lb. That's fully 1.5 lb. less than MacBook. For those who carry their laptops with them constantly, that pound-and-a-half difference might be worth the extra cost. But for most people, the speedier chip in the MacBook, the array of ports, the on-board optical drive and bigger, faster hard drives will make the MacBook a more sensible choice.

In fact, it might even be a solid choice for enterprises reviewing the options for their next hardware-upgrade cycles. Such is the case here at Computerworld. Several of our editors have been evaluating the MacBook -- particularly the keyboard and the screen -- to see whether it would work as a replacement for older Windows-based laptops. Of the five people most seriously considering Apple's laptop, four of them are ready to make the switch, and one is still uncertain.

Given the perception that Macs tend to cost more than their PC equivalents, companies might not even be considering Apple hardware. They should. Our tech folks compared the US$1,599 MacBook with the Lenovo ThinkPad X200. It's a little lighter and smaller, with a 12-in. screen. But for roughly the same hardware, the MacBook could be bought for $30 less. As always, your mileage will vary, depending on the specific needs of your company. But it's a reminder that perception isn't always reality.

The 2.4-GHz Core 2 Duo processor in the MacBook Apple sent over for review performs as snappily as you'd expect. We ran a quick benchmark test on it, using Xbench 1.3 to see how it measures up. In short, it compares quite well with the new MacBook Pro we reviewed. That laptop, with the faster 2.53-GHz chip and twice the RAM (4GB), yielded an Xbench score of 123; this MacBook came within one point: 122.

The Xbench score of 122 on the MacBook is faster than my own 17-in. MacBook Pro -- last year's top-of-the-line model. (It scored 118; no doubt the faster front-side bus on the new models helps a bit in that area.) The new MacBook is also quiet and cool. I never heard the fans come on in nearly two weeks of use, and even when pushing the dual processors to display videos or iTunes' graphically intense visualizer, the temperature never rose above 147 degrees Fahrenheit. The speakers deliver good sound, too.

I've already noted the phenomenal screen, which retains its brightness, even outdoors on the sunniest days -- and it achieves full brightness as soon as the computer fires up. Older LCD screens need up to 20 minutes to do that, and even then, they're still not as bright.

Of primary importance to those who travel a lot is battery life. With the new MacBook, it's very good. Without even trying to tweak the energy saver settings to save juice, I got four hours and 10 minutes from the MacBook. This involved listening to tunes, watching videos, Web surfing and editing text with the screen at three notches below full brightness and the keyboard lighting on.

Turning down the screen brightness a bit more would no doubt extend that use time even closer to Apple's five-hour battery boast.

Apple has taken its most mainstream portable computer decidedly upscale with its latest refresh. Structurally, it should last for years, and it exudes a feeling of solidity every time you pick it up, turn it on and type on it. Not only does it offer faster hardware, but it incorporates innovative touches (like the new track pad) that are both useful and, well, cool. If you don't need the speed or lit keyboard of the US$1,599 model and you're fine with a 160GB hard drive, the US$1,299 model represents a real bargain that should continue to pay returns for years to come.

If you want speed in a stylish but compact design, then the US$1,599 is your ticket. Given that more and more people -- and companies -- are clamping down on spending these days, it makes sense to get the most you can out of your hardware purchases. Either MacBook would serve you well in that respect.