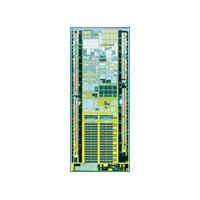 Intel officially started selling its dual-core Atom 300 processor on Monday, charging US$43 for the chip.

Detailed technical specifications of the Atom 330 were not available at the time of writing, but the use of faster memory appears designed to reduce bottlenecks that occur when multiple processor cores compete for access to data that is stored in main memory.

Pricing for the new chip was announced with the release of Intel's latest price list, which quotes a price based on 1,000-unit quantities, a standard measure of chip pricing. The actual price of the chips can be significantly lower for computer makers that buy them in bulk.