Stanford University computer scientist Jonathan Mayer was recently Web browsing at a U.S. airport when he reportedly noticed there were too many online advertisements.

The website for Stanford, for example, displayed a pop-up ad for a 60 percent discount on jewelry. The Federal Communications Commission website appeared to be advertising ladies' boots. 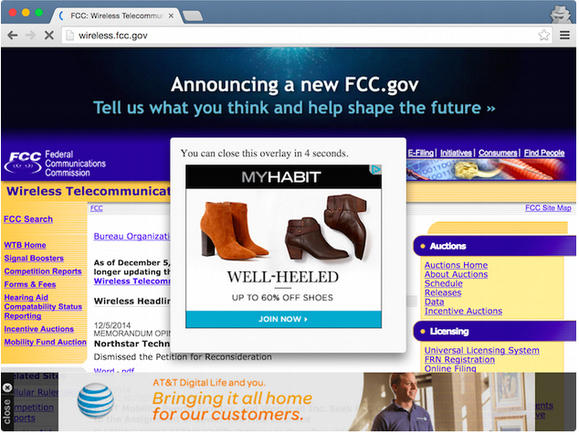 An example of an ad said to be injected over the FCC's website while on an AT&T free airport Wi-Fi hotspot.

"The web had sprouted ads," wrote Mayer on his blog. "Lots of them, in places they didn't belong."

The Wi-Fi hotspot he was using at Dulles Airport near Washington, D.C., is run by AT&T, he said.  Before boarding, Mayer wrote he analyzed the Web traffic to figure out exactly what was happening.

The hotspot was interfering with non-encrypted Web traffic and displaying on pages that were not affiliated with the website. It's often referred to as "injecting" ads and is a somewhat controversial practice.

The platform that was injecting the ads comes from a small company called RaGaPa, Mayer wrote. RaGaPa adds an advertising style sheet into HTTP traffic. If a Web browser doesn't support JavaScript, it injects a background advertisement.

If it does support JavaScript, it intercepts "/ragga" URLs and serves advertising images. It also adds scripts in order to control and load ads from third-party providers, Mayer wrote.

As with many things involving the Internet, nothing free is really free. Mayer points out that there's an incentive for AT&T to try to get some income off the back of a free service, "but this model of advertising injection is particularly unsavory."

The practice exposes a person's browsing activity "to an undisclosed and untrusted business," he wrote.

Mayer wrote that the terms of service for AT&T’s hotspot do not mention RaGaPa or that ads are injected.

RaGaPa, based in Sunnyvale, California, claims to be a pioneer in in-browser content insertion technology, according to its website.

A data sheet on its hotspot monetization technology says the company can do precise location and profile-based ad targeting as well as overlay ads over any website.

Customers can either use a RaGaPa appliance for injecting ads, or use its cloud-based product, which routes users’ hotspot traffic through the company’s servers. 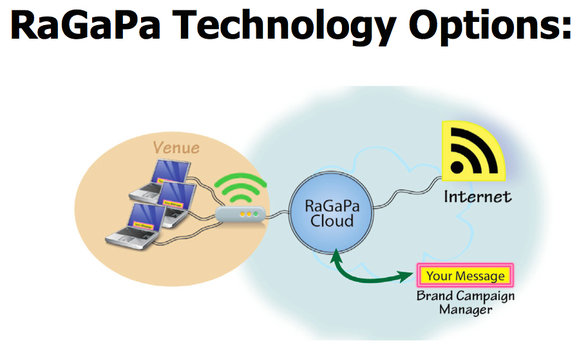 Mayer contends injecting ads in this way is harmful to users. For example, it can tarnish websites and their content since the ads aren’t marked as coming from the Wi-Fi service.

Users are also unaware that their Web traffic is being routed through an undisclosed — and perhaps untrusted — business.

Mayer, who is also a lawyer, wrote that the legality of ad injection is a "messy subject," but there are regulations and laws that would appear to prohibit it, such as wiretapping and pen register statutes and net neutrality rules.

"Regardless of where the law is, AT&T should immediately stop this practice," Mayer wrote.

There is a defense against this kind of ad injection. It won’t work against websites that encrypt their traffic, indicated by the padlock symbol and “https” in the URL bar.