The Symbian^3 OS offers a number of live widgets across the N8's three home screens, but widgets can't be resized. A handy contacts widget allows you to add your favourite contacts to the home screen, while the social-networking widget displays recent status updates from Facebook and Twitter. It should let you to update your Facebook and Twitter status from the home screen, but instead tapping on the widget simply opens the full client to update your status. Text is too small and can't be resized, the app is noticeably slower to load than clients on other smartphones, and the size restrictions imposed on widgets means that tapping the up and down arrow buttons to read status updates is awkward. Some of the N8's widgets have an Australian flavour, such as the News.com.au, SMH and Coastal Watch widgets, but they offer nothing we haven't seen on other smartphones. 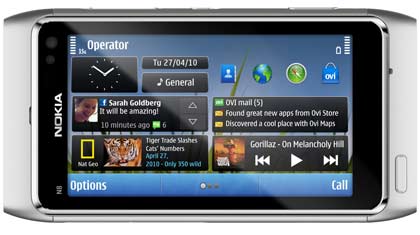 The Symbian^3 OS on the Nokia N8 has three home screens that can be customised with live widgets.

Extra widgets can be downloaded from Nokia's Ovi Store. Though the Ovi Store has steadily improved since its release, it has far less apps than its competitors (about 13,000); there is still no official Symbian app for Twitter, eBay, PayPal or Dropbox (to name just a few). There is also a distinct lack of apps that have a 'wow' factor, such as 3D games, and the store itself isn't as easy to use as its competitors. Strangely, the Ovi Store isn't preloaded on the Nokia N8 — tapping the shortcut directs you to download and install the app.

It's not all bad news: the preloaded Ovi Maps application includes a lifetime, free subscription to full turn-by-turn navigation, which is a nice feature considering you have to pay up to $100 for the same service on the iPhone and other smartphones. The upgraded music player is slicker than ever and displays albums in a similar "cover flow" style to the iPhone. The N8 handles multimedia better than a lot of smartphones we've tested, with sound quality a particular highlight, along with the range of file formats supported. But the entire user experience of the Nokia N8 ultimately leaves a sour taste in your mouth. The N8 is packed to brim with features and has the best camera we've ever seen on a smartphone, but this isn't enough to compete with slick and easy-to-use competitors. And that is truly a shame.

The Nokia N8 is available through all Australian carriers (Telstra, Optus and VHA) but is also sold through online store MobiCity.

Stay up to date with the latest reviews. Sign up to GoodGearGuide’s Gear Daily newsletters

Are MSPs Ready for the Future of IT?